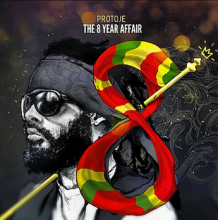 The compilation, released on February 12, has debuted at number five on the U.S.Billboard Reggae Chart, already surpassing its predecessor. Additionally, he achieved fourth spot on the Billboard-affiliated Next Big Sound chart, which tracks musicians who are statistically poised to achieve future success determined by their impact across social music websites.

Protoje’s new album reaches top five of U.S. Billboard chart Additionally, the 8 Year Affair landed at number two on the iTunes Reggae chart in Germany while placing third on the same chart in the United States, only trailing Reggae icon,Bob Marley for the re-mastered and deluxe editions of his classic album, Legend.

The project has also copped top ten positions in countries such as Canada, France, Spain, Luxembourg, Switzerland, Finland and the United Kingdom.

Protoje hosted a much anticipated album launch for 8 Year Affair on the day of its release at Tuff Gong International studios in Kingston; opting to play out his 14-track project instead of performing the songs live as he tried to create an old school Dancehall atmosphere.

He is scheduled to perform a live show on Saturday at the Edna Manley College of the Visual and Performing Arts, where he will give away copies of his album for just JA$500 each.

The 8 Year Affair features singles such as This Is Not a Marijuana Song and Kingston Be Wise, which talks of the infamous incursion in Tivoli Gardens in 2010. The album also features collaborations with singing sensations, Romain Virgo, Tessanne Chin and Toi as well as production from Lifeline Music as well as Protoje’s cousin and internationally-renowned hitmaker,Don Corleon, who produced 13 of the album’s 14 tracks.