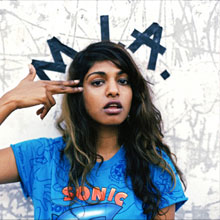 M.I.A. revealed via twitter that her highly anticipate album will be released this December 2012.She will release the album along with a documentary film, art exhibition and a book.Accoring to M.I.A , the tracklist is “still in the making”—between 5 and 15 tracks will land on the album. (“Bad Girls” will definitely be one of them.) M.I.A. also took time to state that here will be “no collabs” and, in what could be considered a shot at ex-friend Diplo. M.I.A says she’s only interested in producers “that dont act like fame whore coloniser.” The album, “a fuck you” to her critics in the industry, will sound like “Paul Simon on acid” and taste “sweet and sour bitter and salt and HOT !”

Watch an informal preview video for April’s “Come Walk With Me” below.A song that was included in a potential tracklist M.I.A. posted to Twitter yesterday.