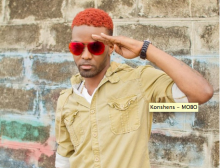 Dancehall’s biggest stage show has decided to add the industry’s hottest property to its lineup as Konshens will be one of the headliners on STING 2012 later this month.

After initially suggesting he would not do STING, Konshens has decided to perform at the 29th edition of the controversial event. The announcement was made on Sunday night by the show’s organizers, Supreme Promotions following talks with the Stop Sign singer.

In the release, Konshens expressed his satisfaction with the new direction STING appears to be heading towards.

“Initially, STING was a show I looked forward to watching, not so much to be a part of, though the hardcore dancehall is healthy for the culture,” he said. “This new turn weh dem a try to mek to give the show a facelift, I’m happy to be a part of it. Sting a Jamaica show fi di grass-roots people dem, so I am happy to be able to perform fi dem,”

This will be Konshens’ first appearance on the STING bill since 208, when he burst onto the scene with his classic track, Winner. However, the favorite for 2012 deejay of the year seemed like a lost cause in the eyes of the typically harsh crowd that filled Jamworld.

“I was at Sting 2008 only as a young artiste, coming off a European tour the day of the show, and di band say dem nah rehearse wid mi team if I’m not present. Mix that with the biggest and roughest dancehall crowd in the world and see wah yuh get. Mi escape the boos still,” he joked.

Additionally, the popular deejay headlined Reggae Sumfest 2012 and even featured on this season of Tyra Banks’ hit show, America’s Next Top Model, which shot episodes in Kingston earlier this year.