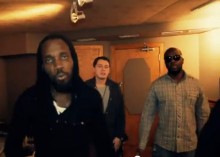 Here is the official video for “Rihanna’s Gun” feat. Mavado. The song is produced by Wyclef & Sedeck Jean and is featured on Cris’ new mixtape, Echo Boom, presented by Billionaire Boys Club and available now!! The video pulls from studio sessions as well as Cris’ live performances around the country.