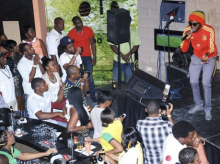 Up-and-coming roots reggae artiste Chronixx delivered a remarkable set at this week’s staging of Behind the Screen series at Usain Bolt’s Tracks & Records. Based on the reception and the huge turnout, it is clear that a new reggae star has been born.

At 10:30 p.m., the artiste graced the stage looking like a younger version of reggae legend Peter Tosh, sporting a pair of shades, a Rasta tam and a red Spanish sweater.

The Warrior singer’s image was not the only thing resembling Peter Tosh. His lyrics were equally rebellious, and the challenges thrown out to social inequalities bring back memories.

Chronixx started his set with the single Beat and A Mike, which was well received by the patrons. He then moved on to Start A Fire, with its chant against Rome.

“A nuh nothing fi mi walk inna Rome and start a fire,” he had the entire venue singing, a rebellion seemingly on the verge of igniting inside the sports bar.

“Mi nuh believe inna inequality,” Chronixx said, going into another thought-provoking single in which he chastised the Government of Jamaica.

Again, the audience loved the manner in which the lyrics were presented, and rewarded the artiste with an encore, as was the case with many of the other songs he performed.

Chronixx, well aware of his meagre popularity on the music scene, said many doubted his capability to pull a crowd to the venue; however, his music would validate the decision of the promoters.

Despite the reality that Roots Reggae music is a scare commodity on local airwaves, Chronixx showed that social networks and guerrilla marketing are indeed avenues to promote music, because several patrons were seen singing the lyrics to some of his less-popular songs like Grow Your Natty.

homage to the island

In this song he personified the island, comparing it to a woman who gave birth to positive fruits.

He also recognised Ricardo ‘Bibi’ Gardner, Warren Weir, Jermaine Hue and Usain Bolt, who were also in the audience, for their contribution to Jamaica.

Despite the musical rebellion which was unfolding, Chronixx still managed to please the women in the audience with songs like Somewhere and Rain Music. Both songs had the ladies screaming consistently.

He also used the performance as a platform to showcase up-and-coming reggae artiste Kelisa, along with other members of his Zinc Fence music family.

He also paid homage to Peter Tosh, I Wayne, Dennis Brown, Kabaka Pyramid and Protoje among others whom he cited as being his musical influences.